A Plea for help from Buglife 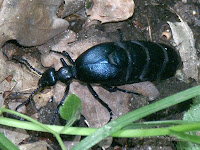 This March Buglife – The Invertebrate Conservation Trust are launching a new national public survey to look for oil beetles.

Oil beetles, so called because they secrete oil from their joints to deter predators, have one of the most extraordinary life cycles of any British insect – they have an intricate relationship with wild bees. A female adult oil beetle digs a nest burrow in the ground into which she will lay hundreds of eggs. Once hatched the beetle larvae are very active and louse-like, and for good reason. In order to survive and reach maturity they must immediately find a bee and hitch a ride on its back.

A solitary bee collecting pollen for its own nest may unwittingly become covered in the oil beetle larvae, secured by their specially-adapted hooked feet. Once in the bee's nest the larva disembarks and set about eating the bee's eggs and the store of pollen and nectar. The larva develops within the bee burrow until the following year, when it will emerge as an adult oil beetle ready to mate and start the whole cycle again.

The reliance of oil beetles on the health of wild bee populations means that, with the decline in our bee populations, the oil beetles are suffering too. Of the nine UK oil beetle species, five are now thought extinct. The ideal habitat for both the beetles and bees is wildflower-rich grassland - a habitat that has disappeared from large parts of our countryside through changes in land use for forestry, farming and development.

The South West is a national stronghold for oil beetles, and all four species have been recorded in the region. The majority of recent Cornish records are of the Black oil beetle.

You are most likely to come across an oil beetle in late March to late May. Oil beetles can be found on wildflower-rich grasslands, heathland, moors and cliff tops, exactly the kind of habitat found in the ACVP Project area. Their habit of seeking out bare compacted earth in which to dig nest burrows means that they are frequently seen on footpaths.

Please keep a look out for oil beetles this spring when walking and enjoying the countryside; and visit the Buglife website http://www.buglife.org.uk/ to report your sightings and photographs, download an identification guide, and find out more about these brilliant beetles.
This project is in partnership with the National Trust and Oxford University Museum of Natural History, and is supported by Natural England.